Musings from Cathy Graham
Spring is a "flurry" season at our house, and although there is still the potential for literal snow flurries, this kind of flurry involves cake. And favourite dinners. And terribly sung renditions of Happy Birthday that set your teeth on edge and make the neighbours wonder if someone's been injured, (done on purpose of course...who can sing the most off tune?). The candles are lit in early March, and are blown out and re-lit six times by early May. Suffice to say, I can't look a piece of cake in the frosting by the time it's all over. That's a lot of life that we celebrate in our house at this time of year, and as I look in the cupboard to take an inventory of birthday candles, I am thankful and deeply grateful for these lives I've been blessed with. So much life at a time of year that is synonymous with birth and new beginnings. Every Springtime for me, Hope speaks. It is evidenced in earth opening and releasing first shoots, branches swollen with buds, and dialects of birdsong filling the morning sky. As I'm writing this newsletter, and as you read it, allow hope to be the accompanying sound track to the words on the page. I say that because there is a sense across the family both nationally and internationally, of expectation. A sense that the Spirit is going to move in a fresh way once again. Being a few newsletters in at this point, I've noticed that collecting, curating and creating a narrative that summarizes the prophetic senses across the VTribe, is similar to tracking the progress of a pregnancy or waiting for bread dough to rise. It is the same seed and the same yeast throughout the process, but the stages of the journey are affected by many things. Poor nutrition and inadequate rest can change the outcome for a pregnancy, a cold draft or a slammed door can affect the rise of dough. But before I get bogged down with too much metaphor, let me clarify what I mean!

There are themes that have resonated over and over again. The call to return to our roots as a Vineyard, to stick with the "main and the plain" as John Wimber said. That God will, and is, calling us to repentance and rest. He is binding up our wounds as we acknowledge the loss and pain. He is restoring our vision and reorienting our compass. He is confronting Fear in its many manifestations. We have feared the devil and shied away from warfare because of past missteps and abuses or instead we have chosen to ignore him altogether. We have feared the Holy Spirit because His moving in our midst creates a kind of holy chaos that is messy, controversial, and challenging to pastor. As we surrender our fears and allow the Lord to take us to those deeper places with Him, we will be able to release control. Jesus is with us in the storm. The storm of our own lives, the storm of cultural, political, and economic upheaval, and the storm that the enemy whips into a frenzy at every opportunity. He, the enemy, has erected a false front that has kept us from taking risks. The risk to trust God again, and the risk to ask. The risk to look foolish, and wait in silence for an uncomfortably long time. The risk to expect Him to speak, and the risk to listen when He does. Part of risking again involves prayer. You might ask how this is classified as risky, since prayer is a central tenet of the Christian faith. But, there are many types of prayer, and my point isn't to explore the various expressions, but to sound a call to focus again on the practice of prayer, waiting, and listening. Alone in our "closet," and together in community. Prayer needs to become more than the opening and closing of our meetings, it needs to be the meeting itself. Saying this, I know there are many vibrant groups of Vineyardite's who have committed themselves to prayer and intercession for years, and for whom prayer is the fire that never goes out. I'm not speaking to those ones. I'm speaking to the invitation of the Lord to re-orient ourselves and recalibrate our compasses as a whole family. I was reminded recently of a story that was told during our Sunday meeting. It recounted comments made by John Wimber who had observed a team of people as they prayed for him and his wife during the mid 1990's. The Spirit manifested through these ones with much shaking, trembling, and general waving and flailing of arms; some of you reading this would remember that season of outpouring that spanned the late 80's and into the mid 90's. John shared that prophetic words and words of knowledge were spoken from each person, one after the other, in a kind of beautifully synchronized dance. Each one deferring to the other as they spoke. In between the speaking there were moments of silence and waiting, and as another wave of trembling would begin, the utterance and the dance continued. Afterwards, John said that he believed he had witnessed a genuine Quaker anointing. In case you're not sure what that means, I'll give a brief overview of who the Quaker's were. 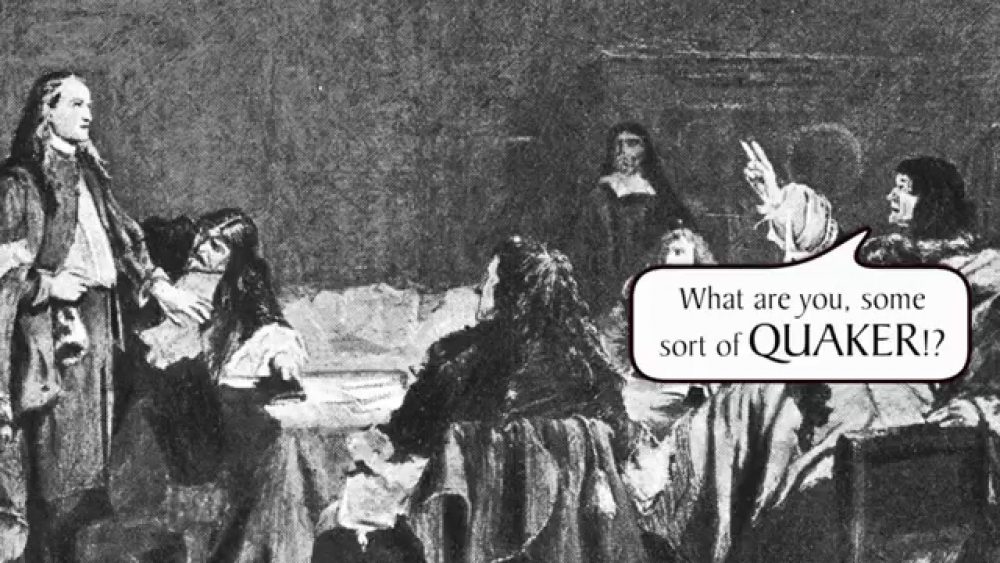 The Quaker's were a movement that began in England in the mid 17th century. They believed that the presence of God dwelled within and that they could hear from the Holy Spirit themselves. They didn't believe in elaborate ceremony, had no official clergy, and were egalitarian in their practice. Their meetings consisted of waiting quietly together until one or more began to "tremble in the way of the Lord." They waited together until the Holy Spirit showed up, and I imagine that they too, engaged in that beautiful dance. Somewhere along the journey as a Vineyard family, we lost the essence and the roots of what God deposited in us during the "renewal" or "outpouring" or whatever moniker you use when describing that period of history. It was never about the trembling and shaking or any other manifestation, but it was about the praying, the waiting, and the listening, and the beautiful dance of the Spirit speaking to us as we did. Imagine with me for a moment if it were possible to take a kind of spiritual heritage DNA test as a movement. In my mind's eye, I see a large percentage or wedge of the pie chart dedicated to Prayer, Waiting, and Listening...next to equally large percentages and wedges of Worship, Justice, and the Poor...can you see it? It can be a daunting thing to wade into waters that have been rough and sometimes dangerous in the past, but we must be willing to swim in that pool again, trusting that the water is safe and the Lord will keep us afloat.

Can you hear the sound of Hope that I spoke of at the beginning? Many are reporting a renewed sense of it in their communities. It is bubbling in communities across the globe, and as we have always said of the voice of the Lord, He speaks like a rain and not like water from a spout. Perhaps this idea of hope brings mixed feelings, and that's understandable. But what if the invitation was just to come as you are, wherever you're at, without an agenda. To worship in song, and in silence. To let go of what you think you should be doing, thinking, or praying in that moment, and just be in His presence. If that thought makes you even the teeniest tiniest bit squirmy, then you've touched the very nucleus of the invitation. Come on in....the water is warm.
"Even youths will become exhausted, and young men will give up. But those who wait on the LORD will find new strength. They will fly high on wings like eagles. They will run and not grow weary. They will walk and not faint." Isaiah 40:30 - 31 (NLT).
Grace and Peace to All,
Cathy Graham,
VTribe PULSE Coordinator Cathy Graham is a national catalyst for Vineyard PULSE and a part of the "on the ground" team in Kelowna.